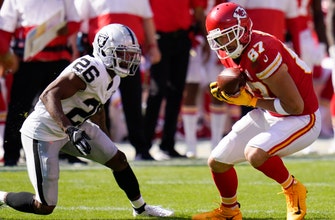 KANSAS CITY, Mo. — Derek Carr threw for 347 yards and three touchdowns, outplaying Super Bowl MVP Patrick Mahomes along the way, and the Las Vegas Raiders nearly shut out the potent Kansas City offense in the second half to rally for a 40-32 victory Sunday that ended the Chiefs‘ franchise-record 13-game winning streak.

Josh Jacobs scored the go-ahead touchdown in the fourth quarter, Daniel Carlson added a field goal a few minutes later, and Mahomes was intercepted on fourth down to set up another touchdown by Jacobs that make it 40-24 with 5:26 left.

Mahomes led the Chiefs quickly downfield, hitting Travis Kelce for a touchdown and Darrel Williams for the 2-point try to make it a one-possession game. But after the Raiders (3-2) recovered the squib quick, Jacobs rumbled for a first down as the Chiefs (4-1) used up their timeouts, and Carr sneaked for a first down on fourth-and-1 near midfield with two minutes left to allow Las Vegas to end its five-game skid against Kansas City.

The Chiefs had won seven in a row over their longtime rival at Arrowhead Stadium, where Carr had been especially bad in losing each of his six starts. But he was simply spectacular with a relatively quiet 17,000 fans in the building, helping to guide the Raiders to their first win in Kansas City since Oct. 28, 2012.

Mahomes spent the entire game trying to escape the Las Vegas pass rush, which manhandled the Chiefs offensive line, and finished with 340 yards passing and two touchdowns along with an interception. Kelce had 108 yards receiving.

The slower second half, when the Raiders finished their comeback from a 14-3 deficit, came after a first half in which the Raiders and Chiefs combined for nearly 700 yards and played to a 24-all draw.

The Chiefs got a touchdown pass from Mahomes to Sammy Watkins, who later left with a hamstring injury, but also had two TD passes brought back by penalties. The first was a 58-yarder to Hill that was wiped out by a holding call on Kelechi Osemele, who left with a knee injury two plays later, and the second was a strike to Clyde Edwards-Helaire late in the half that was negated by Kelce’s offensive pass interference.

Carr looked like he was destined for another miserable day at Arrowhead Stadium with his early interception, but he came back with three first-half TD passes. The first was a 59-yard toss to Nelson Agholar, who simply split the Chiefs secondary, and the second to tight end Darren Waller in the back of the end zone.

When Henry Ruggs III hauled in a 72-yard throw for Carr’s third TD pass of the quarter, the Raiders had a 24-21 lead.

There wasn’t nearly the same amount of offense in the second half — especially out of Kansas City.

The Chiefs had to punt on their first three possessions, gaining just two first downs, and one of those on a penalty. That gave the Raiders a chance to pull ahead on Jacobs’ bullish 7-yard run with 14:14 to go, then make it a two-possession game when Carr hit Hunter Renfrow for 42 yards on third-and-18 to set up Carlson’s 43-yard field goal.

Jeff Heath intercepted Mahomes on fourth down a few minutes later, and Jacobs helped to seal the win for Las Vegas.

The Raiders placed DT Maurice Hurst on the COVID-19 list earlier this week, and the Chiefs reportedly had an assistant strength and conditioning coach test positive. But contact tracing was done within both organizations and there were no additional positive tests, allowing the game to be played as scheduled.

Las Vegas: WR Bryan Edwards (ankle and foot) and DT Maliek Collins (shoulder) were inactive. … FS Lamarcus Joyner hurt his hamstring on the opening play, Renfrow was shaken up returning a punt but remained in the game, and CB Keisean Nixon hurt his hip covering a punt early in the second half.

Kansas City: Along with injuries to Osemele and Watkins, LB Anthony Hitchens hurt his hand and was off the field in the fourth quarter, when the Chiefs were unable to stop the Las Vegas offense.

The Chiefs were supposed to visit the Bills on Thursday night but will instead play Oct. 19, giving Buffalo time to make up its game against Tennessee on Tuesday. Las Vegas is off before facing the Buccaneers on Oct. 25.

Sales and marketing are the backbones of every business enterprise, and with more people opting for online shopping, entrepreneurs are now embarking on online marketing. Here are some valuable tips that will help you boost the traffic to your website and win better leads. Create Relatable Content Table of Contents Create Relatable ContentBe Active On…

Edward Kozlowski a Dementia patient typically informed his daughter how his father had walked throughout Siberia to return to America. Born in Chicago 99 years in the past, Mr. Kozlowski grew up on Midwestern farms. He left West Level throughout World Warfare II to enlist within the Military Air Corps and made 4 flights over…

Your ride will not be complete if you happen to miss one of the essential cycling items. Consequently, you should secure your cycling experience by carrying alongside you the necessary accessories, which will also help you have a smooth trip. These items will not only give you maximum comfort, but they will also help you…

Looking for the one and only list of the finest animal crossing island names ideas you’ll ever need? It’s finally here! Over 8,000 names and a few name generators will keep you busy coming up with charming, humorous, and cool names for your island until 2031. Most people discovered themselves with fewer people to see, more time to…

Cats happen to be a type of villager that can travel around and reside on your island. In Animal Crossing: New Leaf, all cats have pointed ears, and their tails and wear dress-like clothing even. In the series, there are at least 30 cats, 4 unusual cat characters and 26 cat villagers animal crossing. Five…

SAN DIEGO (AP) — Tampa Bay reliever Diego Castillo played catch Sunday afternoon, less than 48 hours after throwing 29 pitches in two innings, and told manager Kevin Cash he was good to go for the opener of the AL Championship Series against Houston. Was he ever. “It’s always good news when you get thumbs…