She was the girl-next-door of the movieland. He was the angry-young-man. They fell in love and the rest, as they say, is history. Jaya Bhaduri and Amitabh Bachchan are one of the finest actors of their generation. More precisely, of any generation. They have acted in some memorable films together over the years. On the occasion of Big B’s 78th birthday we bring a list of movies where they starred together. 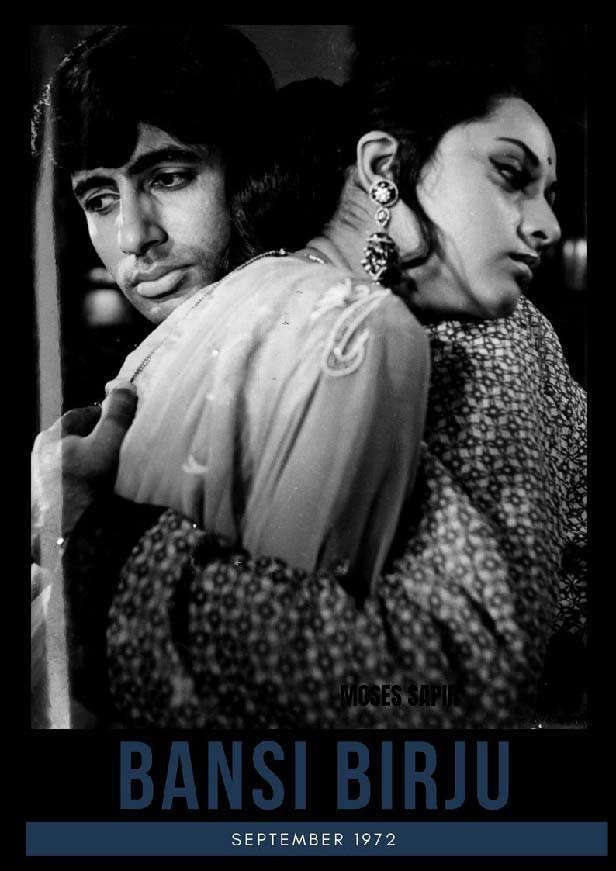 It was Amitabh and Jaya’s first film together. Bansi (Jaya Bhaduri) is forced by circumstances to become a courtesan. One day, tired of the life she leads and wanting out, she gathers up courage and runs off after fending off a rape attempt. She meets Birju (Amitabh Bachchan) in a bus and ends up narrating her life story to him. He’s a good soul at heart and marries her. They start a new life together in his village but rumours of who she was in her past reach even that sleepy hamlet, threatening to snuff out their happy existence. 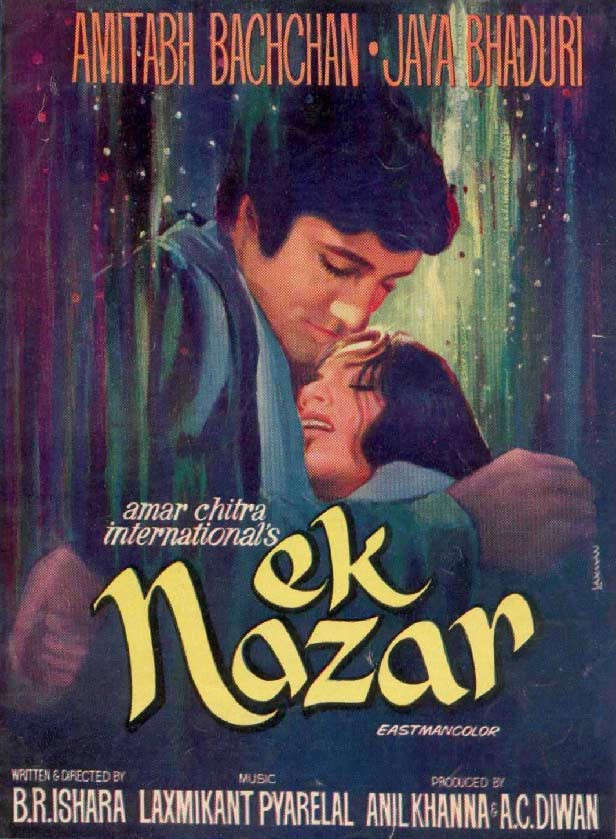 BR Ishara made a musical about a poet whose songs are sung by a courtesan and who ends up falling in love with her. This little known gem has a fabulous Kishore Kumar solo, Pyar ko chahiye kya ek nazar, the Lata-Rafi duet, Patta batta boota boota, and the Lata Mangeshkar solo Pehle sau baar idhar aur udhar dekkha hai. All songs were written by Majrooh Sultanpuri and composed by Laxmikant Pyarelal. Manmohan Akash Tyagi (Amitabh Bachchan) wants to marry the courtesan Shabnam (Jaya Bhaduri), who is very much fond of his poems. Aminabai (Nadira), who runs the kotha where Shabnam performs doesn’t want this to happen. Akash’s father Raghunath Tyagi (Tarun Bose), who is the public prosecutor, too is against the match. Aminbai is found murdered and Shabnam is the chief suspect. Would she get justice or be made a scapegoat? The film’s director BR Ishara was a reformist filmmaker who used to point out the problems of the society through his provocative films. Here too, he mixes social reform and courtroom drama to make for an interesting melange. 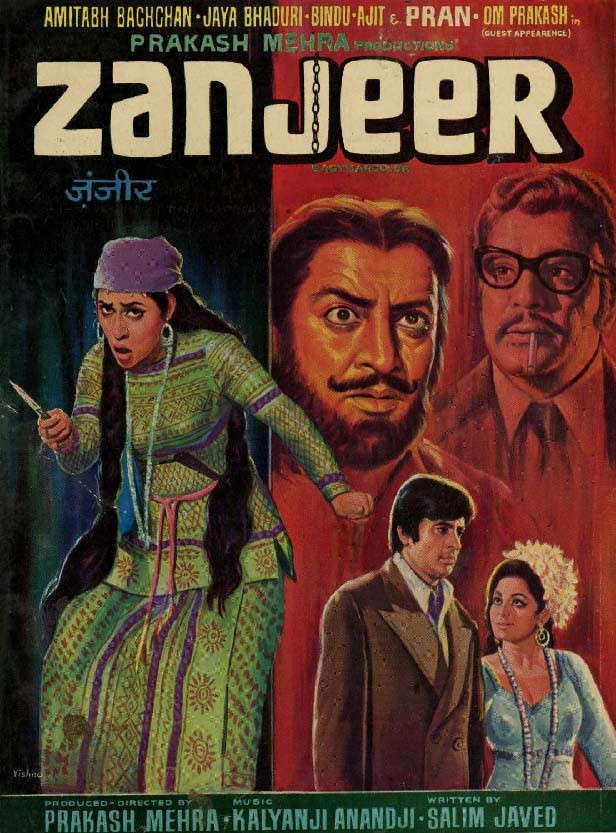 This was the film which started the angry-young-man phenomenon. Bachchan was on the brink of bowing out of the film industry after giving a string of flops. Legend has it that he even had a ticket reserved for Allahabad and returned from the station for a sitting with director Prakash Mehra. Maybe it was the star’s anger at having to struggle so much which came through — whatever it may be, Bachchan’s bravura act has been the platinum standard for screen cops ever since. Zanjeer, which began with Bachchan seeing a bolting horse in a nightmare and ended with him having avenged the death of his parents, is a gritty portrayal of an honest cop’s life in microsome. It’s full of low-lives and bent characters and shows how police have to befriend criminals. Vijay’s (Amitabh Bachchan) best friend Sher Khan is a Pathan goon who reformed his ways. Jaya Bhaduri plays a street gipsy named Mala who falls in love with the morose inspector and gives him some reason to smile. It’s said that real-life love blossomed on the sets between the two stars and soon, they got married. 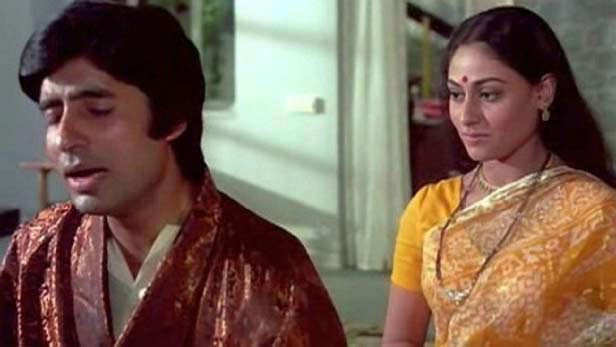 The film was reportedly based on the troubled marriage between classical musicians Pandit Ravi Sankar and his wife Annapurna Devi. The film revolves around two singers. While Lata Mangeshkar was the constant voice for Jay Bhaduri in the film, Amitabh was voiced by Kishore Kumar, Mohammed Rafi and Manhar Udhas. The music was composed by SD Burman, who outdid himself. Subir (Amitabh Bachchan) a renowned singer is a darling of the masses and much in demand. Once, while visiting his aunt in a remote village, he listens to Uma (Jaya Bachchan) singing and falls in love with her. They get married and initially, their days pass in blissful serenity. Trouble starts when Subir asks her to take up singing professionally, just like him. She reluctantly agrees and soon her popularity soars. She’s more in demand than him and he can’t digest this fact. His ego gets hurt and differences crop up between them. He leaves her and she suffers a miscarriage. She becomes hugely depressed because of it. The only way out is through music — would Subir reach out and make her sing again? Watching Amitabh and Jaya, especially in the earlier portions, you feel as if you’re watching the interplay of an actual married couple. They complete each other in the film and perhaps have given the finest performance as a pair in the film. 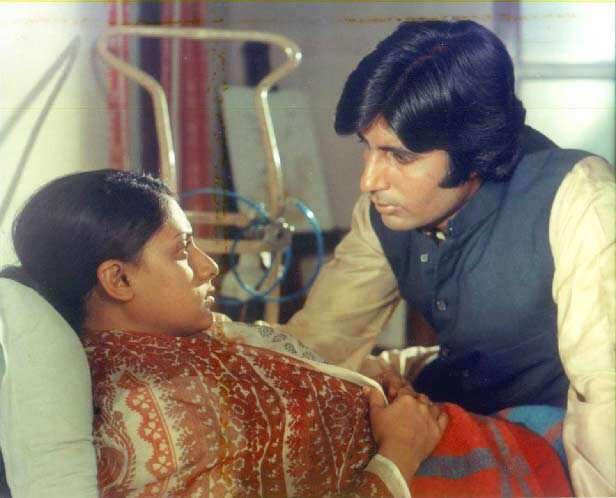 Mili kind of carried the same premise as that of Anand (1971). There too, Hrishikesh Mukherjee has emphasised that the best way to live life is to fill it with laughter. There, Rajesh Khanna’s character is dying from cancer but doesn’t let the fact stop him from spreading positivity. Here too, Mili (Jaya Bachchan) suffers from a girl who suffers from pernicious anaemia, a disease which was considered incurable back then. She’s the apple of everyone’s eye in her building, especially of children, with whom she plays boisterously despite the age difference. A new tenant Shekhar (Amitabh Bachchan) comes to live in their building and their paths cross. Shekhar is a man running from his past and wants to drown his sorrow in alcohol. Once, in a fit of depression, he tries to commit suicide and is saved by Mili and her father (Ashok Kumar). Mili and Shekhar come closer and sort of fall in love with each other. But when he comes to know of her disease, he wants to cut off the relationship as he doesn’t need more grief in his life. Later, however, he marries her and takes her to Switzerland in search of a cure. The film ends on an open note. We don’t know what happens further in Mili and Shekhar’s lives and can only hope for a positive outcome. 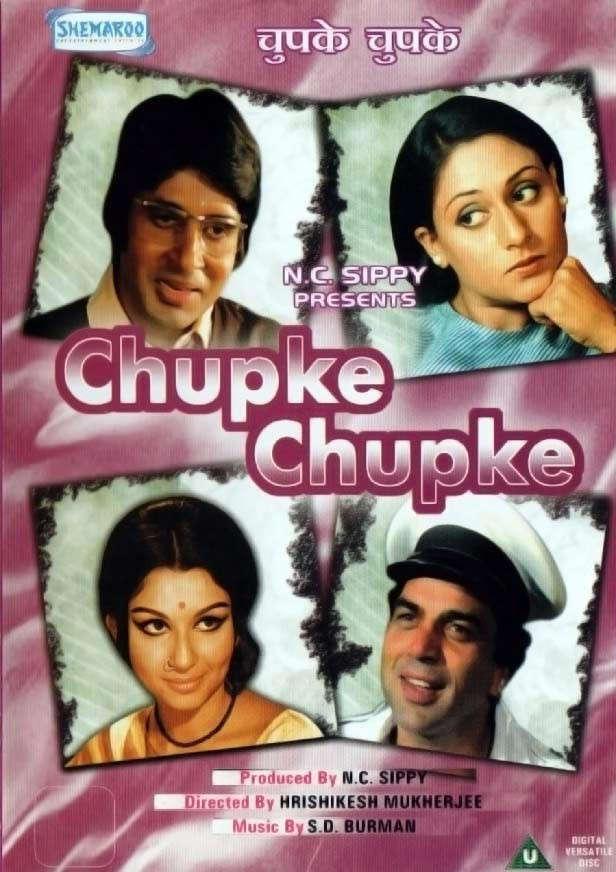 The film is set mostly in two houses — one where OM Prakash lives and another owned by Asrani. Some of the scenes were shot at producer N C Sippy’s bungalow at Juhu. Amitabh Bachchan later bought it and named it Jalsa. The film was a remake of the Bengali film Chhadmabeshi (1971), starring Uttam Kumar and Madhabi Mukherjee. The film centred around the prank played by Dr Parimal (Dharmendra), on his brother-in-law Raghav Sharma (Om Prakash). Parimal comes to Mumbai posing as a driver from Allahabad and is instantly hired. Sometimes later, Sulekha (Sharmila Tagore), too lands up at her sister’s place. The growing intimacy between the driver and the driver and Sulekha is frowned upon by all. Catastrophe strikes when they elope and Sukumar (Amitabh Bachchan) posing as Parimal, comes to Mumbai. He is made to stay in a mutual friend Prashant’s (Asrani) house and love blossoms between Sukumar and Prashant’s sister-in-law Vasudha (Jaya), leading to further confusion. Amitabh and Jaya were married by then and she was pregnant, but director Hrishikesh Mukherjee hid the fact from his viewers through clever usage of the camera. 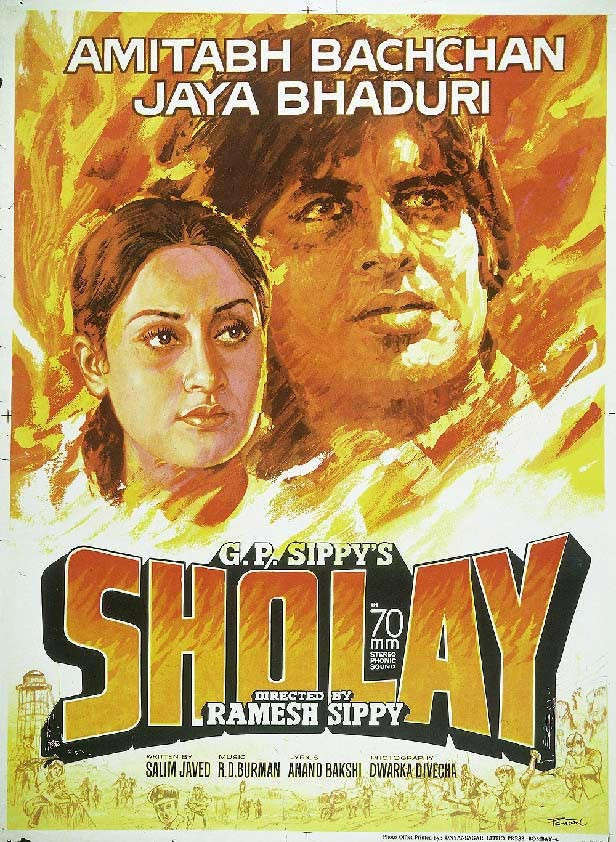 Sholay was Ramesh Sippy’s version of a Western. It had something for everyone. One track revolved around revenge in the sense that after Gabbar Singh (Amjad Khan) kills almost the entire family of Thakur Baldev Singh (Sanjeev Kumar) he hires two tough as nails criminals Jai (Amitabh Bachchan) and Veeru (Dharmendra) to capture Gabbar and his gang. The second strand is of friendship. Jai and Veeru are thicker than brothers and are ever willing to lay down their lives for each other. The mission becomes personal for Veeru when Jai gets killed fighting the dacoits. The third strand involves the romance between Basanti (Hema Malini) and Veeru, which is very robust and over the top, and the understated love between Jai and Radha (Jaya Bachchan), Thakur’s widowed daughter-in-law. Hardly a word gets exchanged between them and yet a wealth of emotions gets conveyed. You feel most sorry for her when Jai gets killed as that means she’ll forever remain a widow. Sholay is considered one of the greatest films of all time. And enjoys tremendous repeat value even today. 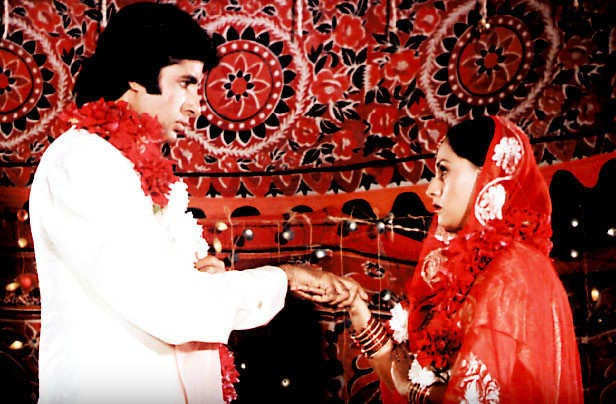 The film is considered a cult classic today but didn’t do well when it was first released. The reason being that people back then considered the casting a bit too close to reality. There were huge rumours of an affair between Amitabh and Rekha at the time and while Yash Chopra supposedly signed real-life husband and wife – Amitabh and Jaya plus the rumoured paramour Rekha to cash-in on the gossip but the move kind of misfired. The film was leagues ahead of its time in the sense that it depicted an extra-marital affair in an unapologetic way. The frames look almost poetic and the chemistry between Amitabh and Rekha did burn up the screen. Amit (Amitabh) is very much in love with Chandni (Rekha) but circumstances force him to marry his late brother’s fiancee Shobha (Jaya). The two lovers meet later in life and the old flame gets rekindled. Their spouses — Sanjeev Kumar is superb as Chandni’s husband — get devastated by this when news breaks out. Fate, however, lends a hand in keeping the sanctity of their respective marriages intact. Shiv-Hari’s melodic score was just what the doctor ordered. Rang barse, remains the quintessential Holi song while Dekha ek khwaab is easily one of the most romantic songs ever. 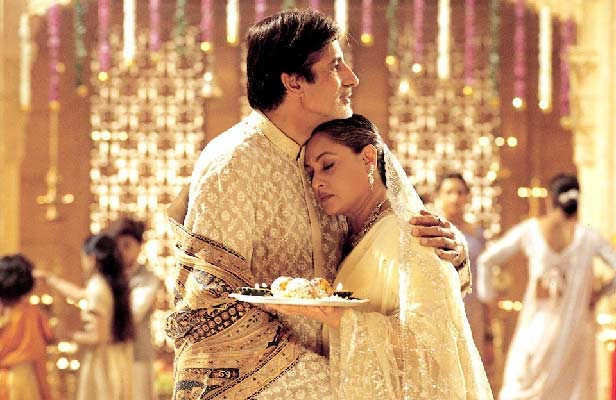 The film was Karan Johar’s take on Ramayana and starred the creme de la creme of Bollywood stars. Tycoon Yashvardhan Raichand (Amitabh Bachchan) and Nandini Raichand (Jaya Bachchan) adopt a child Rahul (Shah Rukh Khan). Rahul is as smart and diligent as his adoptive father and is all set to take the reigns of their business empire. He falls in love with Anjali (Kajol) who belongs to the middle-class. He rebels against his father and marries her and as a result, is turned out of the house. His younger brother Rohan (Hrithik Roshan), the biological son of Yash and Nandini, unites the family years later. The lavishly shot film offered an emotional rollercoaster ride. Jaya Bachchan’s character is shown to be that of a submissive wife who ultimately goes against her husband when she’s reunited with her foster son.